The Church that Stabbed Itself

Local history is built from a multitude of stories, tragic and funny, beautiful and horrible.  One of New Hartford’s more peculiar stories is that of ‘The Church that Stabbed Itself’, otherwise known as the Town Hill Congregational Church.  At the corner of Hoppen Rd and Town Hill is the Town Hill Memorial Park, built on the foundations of this church.  Currently, the bell is down for renovation, see a New Hartford Plus article of a few weeks ago.  This was the site of the first church and meeting house in town, dating back to the 1739.  Its history as a church site and as a park has been long.  However, it is best known for a windy day in January, 1910.

The church that stood there in 1910 had been built in 1829, a postcard perfect of example of Connecticut Congregational Church architecture: a classical white church surrounded by a small farming village and green fields.  But even as it was being built, its congregation was leaving.   By the 1840’s, the centers of Nepaug and North Village were rapidly expanding industrial centers.  The villagers saw no reason to climb all the way up Town Hill, building instead two new churches: North Congregational and Nepaug to serve their communities.  Town Hill’s population was declining as marginal farms were abandoned, what congregation was left would eventually shift to the other churches.  The church gradually fell out of use and in to disrepair.  By 1910 it stood vacant, damaged by lightning and time.

On that January day the steeple was lifted by the wind; it snapped off just above the bell and flipped backwards.  It had been well built, the roof was old, and, as luck had it, it fell just right.  The spire went right through the roof and lodged in the old balcony.  This failure may have been due to the removal, presumably accidental, of the iron tie rods that secured the spire.  The roof patched; but the steeple was never rebuilt.  In 1929, the church was completely removed, only its bell and the foundation stones remain.  A few pieces of the church can still be found: some deacon’s chairs in a private home, a finial at the Historical Society, and rumor has it, quite a few floorboards and beams in houses built around that time on Town Hill.

The memory of the event survives though, enshrined in any number of postcards and for many years as part of the town’s official seal. 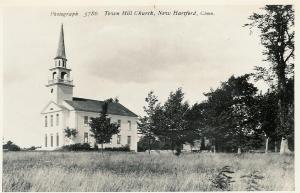