On June 11th, alternative date of June 25, New Hartford’s Town Historian, David Krimmel, will present his research on the town’s brick houses which built in the early 1800’s. The meeting will take place at 7pm in the New Hartford Town Hall.

Prior to this presentation, at 6:30 pm at the same location, we will be holding a special meeting to vote on the new bylaws for the society.  These will be passed out to all attending this meeting.  All members in good standing will be eligible to vote on the bylaws.

Ministers of the Town Hill Church

The Town Hill Church, now a Memorial Park with organized around the church foundation and bell, had only four ministers.

The first church building was raised in the 1740’s; it was replaced in 1829 with another church, also in a classic New England Congregational Style. Following the decision to establish churches in Nepaug and the North Village, (both of which had larger populations due to the manufacturing interests in those villages) the church was disbanded.  The farming population had also moved away for the most part, much of the pasturage of Town Hill was being used for charcoal or pasturage. The building stood vacant from 1854, aside from the rare memorial or anniversary service, until 1929.  It earned notoriety in 1911, when the steeple toppled: it flipped backwards and came through the roof, intact.  The church then became known as the “Church that Stabbed Itself.”  In 1929, the church was taken down.  In the 1930’s the land was turned into a Memorial Park, owned by the town.

Subdivisions are a well entrenched part of American life, whatever one’s opinions of them are.

The first planned subdivision in New Hartford occurred in 1947.  It is still in existence, largely unchanged, and is now called Litchfield Lane off of Town Hill.  It was originally called Town Hill Acres.

The newspaper description of this subdivision is clearly reveals the attitudes of the time.  The newspaper comments that they are negotiating with the town over road maintenance for the new roads being created, an entirely new problem for that era.  They also note that all of the houses will be attached to the public utilities, again something we take for granted.  The houses were also purported to be ‘interesting innovations in the Town Hill landscape”: they were ranch houses, the first of their kind in the town.   The houses were to be neither excessive ‘edifices’ nor ’embarrassingly’ small.  They were designed to appeal to the middle class.

We do not tend to think of suburbia as noteworthy history more often seeing its faults than its successes, at best we are ambivalent about it.  Yet, it is clear that not only is it a major trend in American culture, dominating the late 20th century; but it was also regarded as both innovative and aspirational by the people of the time.

The Church that Stabbed Itself

Local history is built from a multitude of stories, tragic and funny, beautiful and horrible.  One of New Hartford’s more peculiar stories is that of ‘The Church that Stabbed Itself’, otherwise known as the Town Hill Congregational Church.  At the corner of Hoppen Rd and Town Hill is the Town Hill Memorial Park, built on the foundations of this church.  Currently, the bell is down for renovation, see a New Hartford Plus article of a few weeks ago.  This was the site of the first church and meeting house in town, dating back to the 1739.  Its history as a church site and as a park has been long.  However, it is best known for a windy day in January, 1910.

The church that stood there in 1910 had been built in 1829, a postcard perfect of example of Connecticut Congregational Church architecture: a classical white church surrounded by a small farming village and green fields.  But even as it was being built, its congregation was leaving.   By the 1840’s, the centers of Nepaug and North Village were rapidly expanding industrial centers.  The villagers saw no reason to climb all the way up Town Hill, building instead two new churches: North Congregational and Nepaug to serve their communities.  Town Hill’s population was declining as marginal farms were abandoned, what congregation was left would eventually shift to the other churches.  The church gradually fell out of use and in to disrepair.  By 1910 it stood vacant, damaged by lightning and time.

On that January day the steeple was lifted by the wind; it snapped off just above the bell and flipped backwards.  It had been well built, the roof was old, and, as luck had it, it fell just right.  The spire went right through the roof and lodged in the old balcony.  This failure may have been due to the removal, presumably accidental, of the iron tie rods that secured the spire.  The roof patched; but the steeple was never rebuilt.  In 1929, the church was completely removed, only its bell and the foundation stones remain.  A few pieces of the church can still be found: some deacon’s chairs in a private home, a finial at the Historical Society, and rumor has it, quite a few floorboards and beams in houses built around that time on Town Hill.

The memory of the event survives though, enshrined in any number of postcards and for many years as part of the town’s official seal. 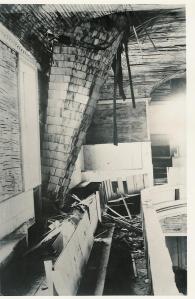 When was that built?

Post offices have always ranged in style and in type.  Many urban post offices built during the early twentieth century are grand statements of civic pride, much like the libraries and town halls of that era.  Other, rural, post offices have been dual purpose: the Bakerville post office was run out a man’s house for a number of years, the same building was also a general store.  In the UK such multi-purpose buildings continue to exist: what appears to be, and is, a convenience store also has a counter for the Royal Mail.   The USPS, for better or worse, now has dedicated offices which only handle the mail.  A typical one is the main New Hartford office.  This building was opened in 1963 and is a good example of the public architecture of that era, solid, utilitarian, and economical, neither especially ugly nor especially elegant.  A similar style of architecture is seen in the Pine Meadow school built during the 1950’s.

Previously, the site had a large 2nd empire style house; this was torn down around 1960.