In the last few weeks there has been a notable increase in the activity in the town focused on the water.  The trout season is open, with fishermen on the Dugway wall, in the Farmington, and fishing by boat in Lake McDonough (Compensating Reservoir) and in West Hill Lake.  One really knows that summer is not far, despite the weather, when one sees the buses for the Farmington River Tubing staged down by the Satan’s Kingdom bridge.  That business only dates from the 1970s.  But, swimming and water sports have been popular for much longer.  Until 1936, the Greenwoods Pond on the Farmington was an ideal place for yacht races and other such sports: formed by the power dam, it backed up a long sheet of water nearly to Pleasant Valley in Barkhamsted.  Equally popular was West Hill Pond, which in the late 1800’s had the sense of romantic wilderness which made the Hudson River and the Adirondacks beloved summer places.  Only, West Hill was much easier to get to. 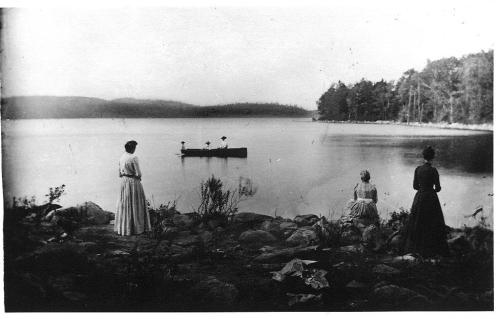 Hunting racoon at night with hounds is something that most people firmly associate with the southern United States, perhaps as far north as Tennessee.  But usually New England does not come to mind.

However, northwest Connecticut had a strong tradition of running hounds on racoon trails well into the twentieth century.  One of the favored areas for the coon hunters was the East Branch of the Farmington River. At the top of the valley, in Hartland, the Newgate Coon Club flourished with dozens of members and a clubhouse.  The Newgate Coon Club primarily ran its hounds on the upper streams and steep hills of the East Branch in Hartland, Granby, Barkhamsted, and Granville (Mass).  Today its land is part of the Barkhamsted Reservoir watershed owned by the Metropolitan District Commission.

Farther down the valley, it was Ratlum Mountain that attracted the hunters. In particular, the Warner family, especially Harry and Lena, and the neighboring Bradley family were ardent coon hunters.  Their hounds ranged over the Ratlum mountain area, including the land that is now Ski Sundown; the hunters followed on foot scrambling over ledge and through laurel, their path lit by lantern and moonlight.

Today the baying of a hound is unlikely to be heard on the mountain, but the racoons remain.

Ice fishing in New Hartford is popular on West Hill Pond in January and February, a century ago ice fishing also occurred on the Farmington and Nepaug Rivers as well as on Greenwoods Pond, which was the dammed section of the Farmington above the town. The rivers were more favorable to ice fishing a century ago because of the number of low power dams that slowed the flow rate considerably; although the rivers still freeze up today, the ice is thinner and rougher.

Tunking required shallow, clear water and abundant slow moving fish. A large hole was cut in the ice and the spiked bar lowered to rest on the bottom of the river. The fish were driven up river by beaters pounding on the ice. Assuming they were swimming slowly enough, as the fish crossed the bar, the people would rapidly raise the bar, spearing the fish. It was not, apparently, a very successful method. It was commonly attempted on shallow river waters where the current slowed the movement of the fish. It is likely that it was used on the Nepaug River and sections of the Farmington below Pine Meadow.

Typing (tipping) is the classic form of ice fishing using bait and a bobber dropped through a hole, with a flag that would be raised if the fish took the hook. It was a very successful form of fishing at West Hill Pond and Greenwoods Pond.

West Hill Pond was always a good fishing spot and still is today. Greenwoods Pond, of course, has returned to its state as a river and still has excellent fishing, but of a different type: trout rather than lake fish. Today, the shallows of the Farmington at Pine Meadow are also ideal for fish and are a favorite spot for trout, but a century ago this was not the case. Pine Meadow was a fishing spot where the art of fishing was happily practiced, but generally without fish involved. It is likely that the combination of the village’s sewers, the outflow from the Greenwoods turbines, and the weir for the Chapin factory made the river inhospitable for fish in the early twentieth century. Today this section of the Farmington boasts some excellent fishing and extremely clean water, some of the best in Connecticut, despite having ever more people on and using the river.

The Greenwoods Dam, on the west branch of the Farmington, failed in 1936. But then what? The Metropolitan District Commission, then known as the Hartford Water company, purchased the water rights along with the land once inundated by Greenwoods Pond. In doing so they also inherited the question of whether the dam ought to be replaced.

But should the dam be rebuilt? While it seems self-evident today that the dam and pond had no real use beyond recreation and that was economically minor; this was not the feeling for several decades. Greenwoods Pond had been a valuable recreation spot for New Hartford and Barkhamsted even after it was no longer a vital power source. It was, arguably, as much an emotional argument as an economic one.  The MDC had no need of another dam, especially if it was one that could not provide clean drinking water. Their’s was an economic argument.

The upshot was several decades of discussion between the towns and the MDC about what, if anything, should replace the dam. The eventual agreement was that the MDC would help fund several recreations areas to compensate for not rebuilding the dam.  Among these areas are Brown’s Corner in New Hartford and Stanclift Cove in Barkhamsted. Today, the old Greenwoods Pond lake bed is open for hunting, fishing, and passive recreation.

A short-lived band, it almost certainly died when the Greenwoods Company left town in 1907. The article is from the New Hartford Tribune, an undated clipping in a series about local businesses.

Note the names, there is a good reason it was the Canadian band. New Hartford had, and still does have, a number of families who came down from Quebec and the Maritimes; a common migration throughout the Champlain and Berkshire regions.

A number of the larger houses in New Hartford were used as summer houses in the late 1800’s and early 1900’s.  These houses would routinely host guests for a weeks or months.  They were close friends, family, and business acquaintances.  New Hartford was easily reached by train from New York City, Boston, and Washington D.C.

This photograph taken in 1880 shows that people did not dress for tennis the way we do today! Only a few people can be definitely identified in this photograph: the man seated on the right is Morris Smith, a businessman with interests in Hartford and New Orleans, the woman seated next to him in the dark dress is his daughter, Carlotta Norton Smith.  Beyond that it is difficult to say, though that particular event was attended by the noted actor William Gillette, so he may be in the photograph.

The performing arts in New Hartford have a long and proud history supported not only by the various professional artists who have called the town home, but an enthusiastic group of volunteer amateurs, the people without whom no community theater can survive.

The groups have been varied in name and usually seem to have no clearly defined start or end date.

The Home Dramatic Club: circa 1900

The New Hartford Chorus: circa WWI through the mid 1920’s at least

The Village Players: circa WWII

Other groups, such as the English literature club, the Women’s Club, various churches (in particular North Congregational), and schools sponsored various public concerts, plays, and recitals as well.

The New Hartford Community Club was established in the 1930s. It operated out of the Community House, where the main New Hartford Post Office now stands, until a fire destroyed that building in 1946.  It is often thought that the Club ceased at that time; but it continued for some years on an intermittent standing.

In 1956, it presented Gilbert and Sullivan’s H.M.S. Pinafore, under the direction of Fenno Heath.  In 1957, it built the two tennis courts, which stand to this day, near the North Congregational Church.

In 1962, it presented ‘A Pops Concert’ by the Hartford Summer Symphony, under the direction of Skitch Henderson.  The program is, as all programs are, something of a cultural time capsule.  The graphics for the ads are clearly from the 1960’s.  Banks dominate as sponsors; followed closely by manufacturing, including the Hurley Company, Winsted Precision Ball, Sealtest, O&G, Guida’s dairy (the solely a Ct firm), and one Richard M. Geddes a purveyor of organs and pianos (whose ad helpfully notes that the piano used in the concert was a Yamaha 6’1″ Grand).  Insurance, law, and brokerage firms are a distant third in sponsorship.

Skitch Henderson was best known for his work as the musical conductor for the TONIGHT Show; also working on ‘Andy Hardy’, the ‘Wizard of Oz’, and ‘The World of Bob Hope’.

The performance included pieces by Bernstein (West Side Story), Tschaikovsky (waltz from Sleeping Beauty), excerpts from the ‘King and I’ by Rodgers, and arrangements of ‘Johnny Comes Marching Home’ and the ‘World according to Bob Hope’, both arranged by Skitch Henderson.

The performance took place at Camp Pioneer on West Hill, and it must have been an enjoyable evening indeed.

We would like to thank Sheryl Robinson for her wonderful presentation on Native Americans in Connecticut this evening. The presentation was well attended by around fifty people.  Mrs. Robinson took us from the earliest neo-paleolithic evidence through to the Woodland tribes and the development of a trading culture along the North Atlantic coast, to the dark days of the 1600’s during which a combination of long-standing tribal rivalries, conflict with the overwhelming presence of the English settlers, and devastating plague completely destroyed Native American culture in the region.  Following this we looked at the earliest written evidence of Native Americans in New Hartford, found in early land deeds were Native Americans from the Tunxis tribe and the Hartford region bought land in New Hartford; we then turned to the eventual relocation of the same groups to Wisconsin and the creation of the Brothertown Village, a group of Connecticut and Rhode Island tribes: Narragansett, Pequot, Mohegan, Niantic, Tunxis, Wangunk,  and Montauk; which has since formed its own distinct culture.