The Forests of New Hartford Part I

Thank you to everyone who made our eighth annual wine-tasting fundraiser an amazing success! 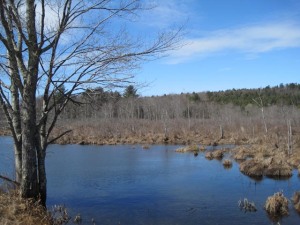 New Hartford, like much of Connecticut, is primarily a forest landscape, no matter how fragmented.  However, despite the ancient appearance of the forest, most of this is second or third growth forest for New Hartford’s landscape has undergone several massive changes in the last three centuries.

Prior to settlement in the 1730’s, most of New Hartford would have been forest but not all.  Like the rest of southern New England the forest was broken by swamps, beaver meadows, and clearings made by Native Americans, fires, and blow downs.  Although there is no record of permanent settlement by Native Americans in New Hartford, the region was used for hunting and for mining soapstone; it is probable that some clearing and management was done, especially in the areas near the soapstone quarries, mainly in Nepaug.  Both the Farmington and Nepaug valleys would have been swamps.  Swamps and beaver ponds would have also occurred on smaller streams; actual bogs could occur even on the tops of hills.  Driving on Rte. 219 between Dings and Carpenter roads a faint idea of what these swamps would have looked like is apparent: a mix of red maple, alder, and dogwood giving way to winterberry, blueberry, marsh grass, and then open water.  The photograph above is of this swamp, taken from Maple Hollow Road.  Bottom land, where seasonal flooding occurred (for example the Farmington below Pine Meadow) would have had silver and red maple along with sycamore; in other areas of the river sandy, glacial outwash soil meant that white and red pines dominated.  The hills would have been a mixture of American chestnut, oak, birch, beech, maple, ash, and pine.  Hickory, hemlock, tulip poplars, basswood, elm, and a multitude of other trees would have also been abundant.

By the mid 1700’s, however, adventurous loggers had already mapped the area, staking the Crown’s claim to the highest quality lumber for use by the Royal Navy.  The early name for the Farmington river valley west of the center of town, Mast Swamp, dates from this period.

In the colonial era wood was a critical resource used not only for building houses, but for fences, tools, household items such as buckets, for making dyes and medicines, and for use as charcoal and fuel.  Charcoal is often overlooked, but it was required for the making of iron and gunpowder.  A productive iron furnace could use well over a thousand acres of wood each year.  Almost every type of wood was used, each suited to a specific task: oak for framing, pine for siding, cedar for fences, chestnut for flooring, birch for charcoal, and so forth.

The clearing of the forests would have begun on the hilltops, especially on Town Hill, which was the first settlement.  High quality lumber, such as the white pine of Mast Swamp, would also have been cut.  The last areas to be cleared would have been the steep, rocky hillsides such as the Ledges of Satan’s Kingdom and in the true swamps: the difficulty in access and the relatively poor quality of the lumber would have meant that there was little incentive to go there.  By 1800 it is estimated that nearly 90% of Connecticut had been cleared.

This did not mean, however, that trees were not in evidence.  Woodlots and hedgerows were used to ensure a continued supply of lumber.  Land that was unsuitable for even grazing was often turned into these woodlots.  Fast growing species such as ash, poplar, and birch would have been primary species in these areas.  Elsewhere trees were planted for other purposes.  Sugar maples were planted to shade roads and to provide maple syrup, the primary sweetener until the Caribbean molasses trade took over.  In New Hartford only a few of these maples remain.  Most of the giant sugar maples on Town Hill, West Hill, Holcomb Hill, and scattered elsewhere date from the early to mid 1800’s.  Some may have been planted even earlier.  These trees, so symbolic of the New England landscape, are now in decline; and each year’s storms take down a few more.  Other trees, especially nut trees such as hickories, chestnuts, and butternuts, were planted to mark boundaries; many old deeds record a property corner as being, ‘the big chestnut’.

After 1800, economic and demographic shifts were also reflected in the fate of the land….

One response to “The Forests of New Hartford Part I”